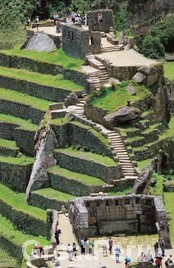 Barely touched by time, between certainty and the unknown, Machu Picchu stands as one of the most beautiful human utopias suspended between the mountains that attract toward Earth and the majesty it rises towards infinity. There can be no better summary of harmony between nature and man-why, as a reading, perhaps late, its transcendence, in 1981 created the Historic Sanctuary of Machu Picchu, which includes not only the monumental archeological but the 32592 hectares of natural resources that surround it.
The archaelogical monuments of Machu Picchu is located in the district of the same name, province of Urubamba, 112.5 km northwest of the city of Cusco, mimetizada among tropical forests fog to 2490 meters above sea level . The climate in this area within the brow jungle cusqueña, introduced during the year, two seasons dramatic, a dry April to October and another rainy, with a permanent cloud cover from November to March. The Inca citadel of Machu Picchu stands on Batholith of Vilcabamba, natural formation consisting of intrusive rocks of proximadamente 250 million years ago, feature that makes it a place, largely invulnerable to seismic activity. The rock’s most extensive and abundant Batholith is the gray granite blank, composed of quartz, feldspar and mica, whose chemical composition and structure, are very suitable for buildings of this type. The archeological site of Machu Picchu is composed of a sector that former occupants devoted to farming and another who was an urban center. It is the latter which houses the largest architectural elements of the Citadel, where there is the amazing talent of its builders.

In this sector highlights the High Cemetery, for the priests and nobles, the Main Temple, the Plaza Holy, Holy Rock, the Temple of the Sun, the House Priest, the Temple of the Three Windows and the Intiwatana, among other attractions.
The exact role for which it was built is still under discussion. Was it perhaps a adoratorio for worship of Pachacutec? He seems to command “build”. The fact is that because of its location in an area of difficult access, it remained hidden among forests until its discovery in the second decade of the last century.
There are several theories about the discovery of this archaeological complex. However, most researchers attributed the discovery to American professor of Yale University Hiram Bingham, who at the beginning of the twentieth century became interested in the Inca culture and their ways, embarking on a scientific expedition to the Sacred Valley of the Incas. Upon reaching Mandorpampa, Bingham makes contact with the peasant Melchor Arteaga, who tells you about the existence of the ruins of an ancient city on the heights. After a painful uphill walk, found two peasant families who worked the land of some platforms in the lower west of the ruins, but it is a boy, the son of one of these families, who will guide them and eventually leads to the heart of the archaeological remains. Thus, after spending hidden by thick vegetation for several centuries, July 24, 1911, Machu Picchu (Quechua voice which means “old peak” or “old hill”) was shown to the world with all its architectural brilliance.

Subsequently, the Peruvian State assumed the conservation of this archaeological site, and today is the National Institute of Culture (INC) the institution undertaking the work of preservation and maintenance. However, as the Cultural and Natural Heritage of Humanity, the Historical Sanctuary of Machu Picchu confined on the one hand to the archaeological complex, which includes the Inca citadel, the other monuments scattered in the surrounding territories and the Inca Trail, and on the other, a vast expanse of cloud forests where human predation survive a wide variety of tree species, orchids and animals like the cock of the rock, the quetzal and the Andean bear. Therefore, both the INC and the National Institute for Natural Resources (INRENA), have powers and responsibilities shared in the archaeological and ecological aspect, respectively.