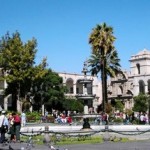 Arequipa is the second largest city in Peru, recognized by UNESCO as World Cultural Heritage in 2000.
He was known in the colonial era as “The White City” for its many temples and houses built with ashlar (volcanic lava). Three volcanoes stand compared to Arequipa, including the majestic Misti (5821), which can be seen from anywhere in the city.
One of its main attractions is the monastery of St. Catherine, considered a ” Small city within a city “, founded in 1580 for cloistered nuns and opened its doors to the public in 1970. There are also old houses such as Casa del Moral and House Goyeneche, who retain their doorways carved in ashlar. Another stunning attraction The city is the “Lady of Ampato” or “Momia Juanita”, a teenager who was inca offered in sacrifice and that today can be accessed at the Museum of the Andean shrines Catholic University of Santa Maria (UCSM). A vast countryside surrounding the city, emphasizing She picturesque Mill Sabandía and the thermal baths of Yura.

At present, Arequipa is a major trading hub in the area south of the country,
Which emphasizes the textile production of alpaca wool with export quality. It has a
Exquisite cuisine, in addition to excellent tourism infrastructure suitable for events.
Altitude
2335 m altitude.
Getting there
By air: from Lima (1 hour 25 minutes), from Cusco (50 minutes), from Juliaca (30 minutes).
By land: South Panamerican Highway from Lima (15 hours or so), from the Nasca (9 pm), from Puno (4 hours), from Lima (8 hours).
Lodging
Hotels up to 5 stars.
Activities
City tours in the city, visiting houses and churches, visiting the countryside, trekking.
Tourist services. Arequipa offers transportation, full-service food and other tourism services.
Recommendations

Weather dry, warm, cool evenings and nights.
Feasts
Feast of the Virgin of Chapi (May): These are the traditional pilgrimage to the Shrine
Chapi, about 90 km from the city of Arequipa.
Anniversary of the city of Arequipa (August 15): In this era occur Fair
International Arequipa (located on the Cerro Juli), craft exhibits in the Fundo
Fierro, the Festival of Dancing – Festidanza, and the International Competition Climbing the Misti.
Feast of St. Ursula (October 21): festival very popular and entrenched in the population, which
Celebrated with the entry of Capos, there are firework displays, masses and processions.
Restaurants

In Arequipa working with the leather embossed occurring belts, articles desktop
And furniture; ashlar used to make decorative items and wrought iron in the manufacture of
Lanterns, grills, lamps and decorative furniture.