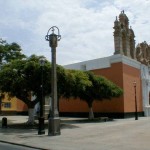 Jiron Francisco Pizarro 550. Visiting hours: Mon. – Sun. 8:00 A.M.-12:00 P.M. and 4:00 P.M. – 8:00 P.M.
Originally built in 1536, it was destroyed in 1619 by an earthquake and rebuilt in 1634. The architectural structure, unlike other churches in the city of Trujillo, was built at the center of a block and not a corner as usual for this type of monuments. Its main facade is of Baroque style and, instead of bell towers, it has a two parapets. The interior art work is of great value with pieces such as the main altar (originally belonging to the Iglesia de la Compañia) and the lateral altarpieces with paintings from the seventeenth century.